Rob Blakers, born in 1957, grew up in Canberra, close to the ACT Ranges and the south coast of NSW. He took up bush walking in high school and cross-country skiing during the course of a four-year zoology degree at the Australian National University. This degree culminated in a year long research project into bogong moths and other insect life in the Main Range region of the Kosciuszko National Park in NSW.

Upon completing university in 1980 he travelled to Tasmania for a three week cross country skiing holiday. When the snow failed to materialize, he began to work with the Wilderness Society in the campaign to prevent the damming of the Franklin River. This was an extraordinary time in the lives of many people, and a campaign which was ultimately successful in its aim of protecting much of Tasmania’s southwest wilderness as a World Heritage Area. Today, however, large tracts of wild country in Tasmania's magnificent Tarkine, whilst protected from logging, remain open to mining, which has the potential to devastate this extraordinary region.

Images from Rob’s collection have been used extensively for nature conservation, and in a wide variety of publications including books, posters, cards, calendars and diaries, and in magazines ranging from New Scientist to Outdoor Australia.

Many images on this site were taken using view cameras – a medium format Horseman and a large format Ebony. Nikkor and Schneider lenses ranging from 65mm to 300mm were used. Additional images were made using a Canon 5DMk II digital camera with a range of Canon lenses. Rob currently photographs using a Fuji medium format digital system. 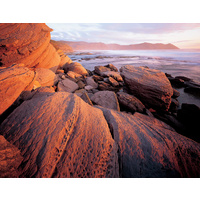